Category Added in a WPeMatico Campaign

This holiday season, we hope you’ll join us in celebrating new beginnings in 2022 with something sparkling.

Femicide: Name it, count it, end it!

Femicide is the killing of women and girls because of their gender. According to official data gathered by EIGE, 444 women across 10 EU Member States were killed by their intimate partners in 2020. EIGE has released a package to help EU countries gather solid data to prevent such killings.

Warm welcome to the new Head of Knowledge Management and Communications

The EU scores 68 points out of 100 in the Gender Equality Index, released today by the European Institute for Gender Equality (EIGE). This is a microscopic increase of just 0.6 points since last year’s edition.

It is with great sadness we report the death of our former colleague Katarzyna (Kasia) Wolska-Wrona. Kasia worked as a seconded national expert in EIGE’s gender-based violence programme from November 2018 to November 2020. She was a brilliant mind, a tireless champion of women’s rights, and a warm and open person who took the time…

The social and economic impacts of the COVID-19 crisis threaten to roll back recent progress in gender equality, including an overall trend of upward convergence. Despite slow progress in some areas over the past decade, crucial improvements had been made in countries with lower levels of gender equality.

The European Institute for Gender Equality (EIGE) has estimated that the cost of gender-based violence across the EU is €366 billion a year. Violence against women makes up 79 % of this cost, amounting to €289 billion. 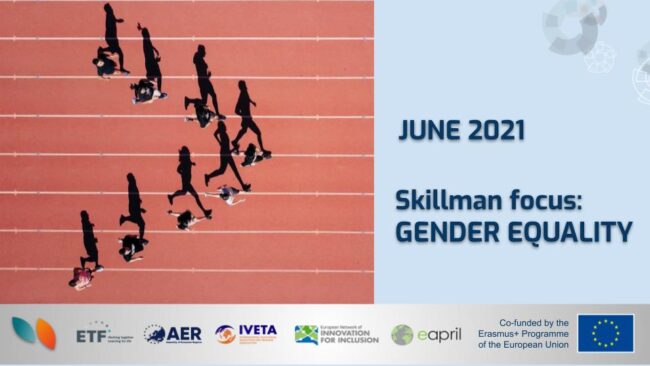 Meet up a new news from Skillman.eu with a gender focus : GENDER EQUALITY IN SPORTS: GETTING CLOSER EVERY DAY

Sports and gender equality are related in many ways. Sport is a social and cultural activity in which social constructions of masculinity and femininity play a key role. Traditionally, sports have always been dominated by men, both in terms of participation and governance. Women were excluded from the first modern Olympic Games, held in Athens…

Recently European Institute for Gender Equality (EIGE) has released gender equality index game. By entering your gender and country of birth to see how your life could turn out. This tool is very interesting and can give a clear perception on each EU country gender policy. Are you ready to test yourself ? Are you…

On 28 October 2021, EIGE will reveal the results of its Gender Equality Index during an online conference. This year, we are taking a close look at how gender affects health and access to health services.